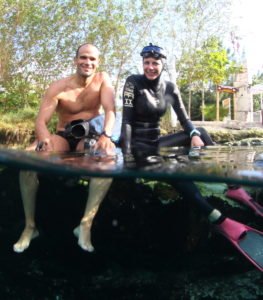 Learn their secrets to breath-hold diving.  During this eight-day immersive experience, we travel deep into the ancient Mayan world to dive into the most beautiful cenotes in the region. This trip is not only designed for the “deep at heart”.  We explore both deeper and shallower cenotes for the most complete adventure possible.  The trip also includes daily yoga, specialty workshops, visits to Mayan ruins, and long bus rides down desolate dirt roads.

The cenotes freediving adventure begins and ends in the international hub of Cancun, Mexico with inexpensive flights to and from North and South America as well as Europe.  Arrivals are set for February 27th (before 8:00 pm)  and afternoon departures March 5th.  Below is a comprehensive list of adventure winclusions: 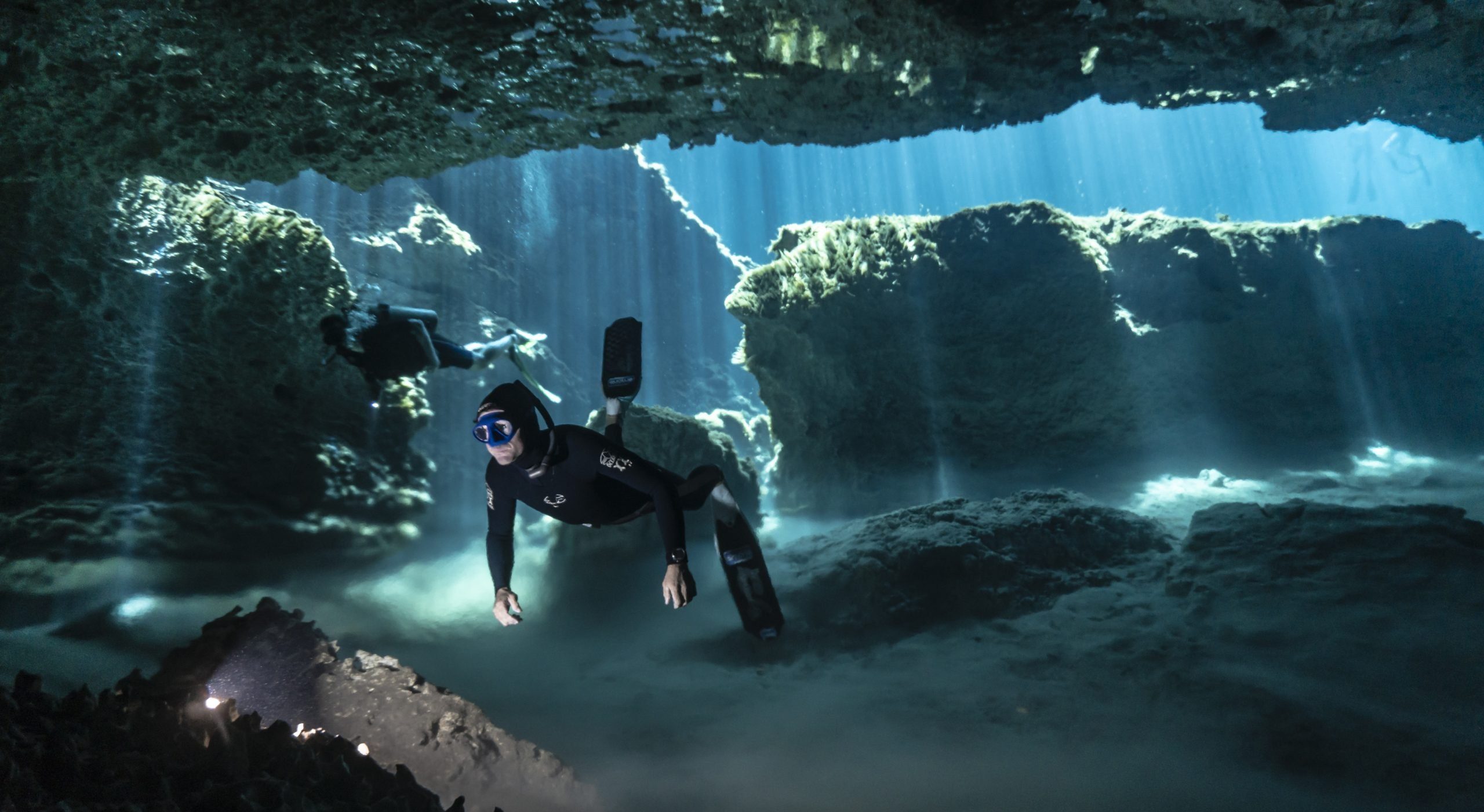 Tentative Schedule: To Be Determined

Watch the team as they discover a virgin cenote in the jungle of the Yucatan Peninsula.

Carols is a world class freediver and record holder. He started seriously training for freediving in 1996, and got his first national record in 1998. In October 2003, he became the first human to achieve a Free Immersion of more than 100 meters (-101m, Venezuela 2003), certified by AIDA World Record and Guinness World Records.  He also was the first freediver to pass 100 meters in Constant Weight (-102, Cyprus 2004). Coste became the first AIDA Depth Individual World Champion, He won the World Championship making a new World Record in Constant Weight -105m, celebrated in Nice, 2005. He broke the AIDA world record for Variable Weight Free-diving, with a 140-meter immersion in the Red Sea, Egypt, on May 9, 2006. This record was superseded by Herbert Nitsch, on 7 December 2009 at Dean’s Blue Hole in the Bahamas. In 2010, after a long relationship, He got married to his manager Gabriela Contreras.

If you find yourself in earshot of Ashley you will quickly learn that she has several passions; her faith, her family Ren and Ani Chapman, their live aboard sailboat and freediving. Freediving took Ashley by storm in 2008 when she decided to participate in the PFI Intermediate course in the Cayman Islands. The only goal in mind, to reach 100′ she exceeded her expectations by maxing out the course at 132′. Intoxicated by the rush of success in a new sport she went on to complete the PFI Instructor program. She is now an independant PFI Instructor and president of Evolve Freediving, teaching freediving courses in her home port of Wilmington, NC and throughout the Caribbean.

Other freediving accomplishments include selection for the 2008 US Women’s Team in the World Freediving Competition, where the US women clenched the silver medal.  She succeeded at the Deja Blue 2010 Competition, where again, she came home with a silver medal. At Deja Blue II in 2011 she came home with three national records in the discipline of CNF.  The deepest record being set at 58 meters.

Since then Ashley has set three world records in the CNF discipline accomplishing 67m for the deepest of the records.  She has also set 14 national records across all depth disciplines making her the current Deepest Woman in the US.  Among her best dives include the one made to 50′ with Ren Chapman at Deja Blue 2010 where he asked her to marry him!  Ashley enjoys setting records but looks forward watching Ani break them all…if she wants to.  www.evolvefreediving.com

Ren was born and raised in Wilmington, NC, a quaint, seaside community rich in history and natural resources. From day one he was immersed in coastal living and was fortunate enough to have been raised with his toes in the marsh and estuaries of the area. Ren’s father, biologist and teacher, has been the Scuba instructor as well as the director of water safety for the University of North Carolina at Wilmington since the mid 70s and always had Ren around the ocean. Ren began scuba diving at the age of 6 years and after a short period of inactivity during his college years he got back in the water and has never come out.

Ren attended the University of North Carolina at Wilmington where he received an athletic scholarship to play baseball. In the summer of 1997 he spent all summer between thunderstorms obtaining his private single engine pilots license, which is how he scored Ashley.

He began freedive spearfishing in June of 2006 and took the Performance Freediving intermediate course in October 2006 in Miami. Unable to do the ocean portion of the course due to weather, he traveled to the Cayman Islands where his love for the sport as well as the sense of accomplishment grew.  Since Ren’s introductions into the sport, he has refined his skills by becoming a freedive instructor and has run safety and/or logistics for almost every major freediving competition in the western hemisphere including Caribbean Cup Freediving Competition, Deepsea Challenge, Vertical Blue, Big Blue and has assisted at Deja Blue.  www.evolvefreediving.com

Pedro hails from Merida and is our West Yucatan guide.

Our Eastern Yucatan guide, Julien is the founder of Pranamaya Freediving and Yoga education.  It is a project that started at the beginning of 2013 in collaboration with Aurora Forteza. Julien is originally from France but has been living in Mexico since 2008.

Julien discovered his passion for the water at the age of 10 in a swimming school where he was introduced to scuba diving and freediving. Really quickly, Julien understood that the underwater adventure would be his destiny. First as scuba instructor then as freediving instructor, he has been traveling and working around the world since 2001, in countries like France, Egypt, the Maldives, Bahamas and French Polynesia but it was in Mexico, especially the Yucatán peninsula, that Julien found his home.

Julien dedicates his full energy to Pranamaya Freediving and Yoga Education, with the goal to share his passion and his experience of freediving and scuba diving. His knowledge of the area will make you discover unique places to practice your favorites activities. Due to his experience, Julien has great teaching skills and enjoys very much educating people to freedive and scuba dive. His courses always combine fun learning and also the visit of amazing dive sites with a real environmental awareness.  http://www.pranamayamexico.com/